MACHINA is a turn-based tactical game that incorporates random elements in both the environments and the available actions. You take control of an A.I. that is aiding a human through multiple levels and is making sure they stay alive for their ultimate goals.

The controls are thoroughly explained in the first dialogue segment of the game.

VERY good game. I like these types of puzzles. Sound effects in the game are good too.

One con is that you aren't able to cancel a selection. Also, sometimes when you want to move somewhere, you can't, as if there is an invisible wall there. You should also be able to pick which level to be on.

Thank you so much for playing and for the comment =] The WebGL version was actually the version I submitted for the Ludum Dare jam (for which this was made in 48 hours); the "post compo" version for desktop addresses the canceling issue and some other bugs (like the orbs not appearing).

My long term goal is for this game to be properly made into an actual game, but who has the time? 😅

I just think the blue balls need to spawn more because i only see one in my entire game and i just don't reach it because it was next to an enemy (so i just don't know what it does xD).

Maybe if you have the possibility to keep with you 1 or 2 cards it will help !

Also yes, you make me smile with your text so thank you x)

Thanks for your comments! The version you played is from the LD46 jam and I'm in fact trying to work on a more complete version of the game, where I address all these issues (and more) + add more content and replayability!

You should have used the sight system in Invisible Inc. Basically, enemies can't see you if you are hiding behind a wall, unless they are the other side of that wall. It's hard to explain. I believe there are articles about that game mechanic.

That thing spawned in me.

I liked the vibe of your game, i thought it was a good tactical idea, reminded me of Transistor a bit. The music and sound was right on the spot, good atmosphere and mood altogether.  There was a bit too much tutorial text for me in the beginning, i clicked away on most of it, and i would of liked to be able to move the character as well. Good job!

Great job, I really enjoyed every aspect of this game !!!

The visuals are simple but clean and beautifully lit.

Gameplay is very fun and intuitive, once you used the power up once you understand how it goes from there.

hate this game. you cant even get full health after lvl end thats stupid

stop it. it is only ur fault for being trash at it.

But I loved it, thank you!

I'm delighted to let you know that I featured your game again, this time in my Top 10 itch.io Games of the Week video!

Hello, nice game, nice graphics. im a programmer looking for a graphic designer or a team to join and maybe work on new games, are you interested?
m.shahiri.m@gmail.com
my LudumDare Game:
https://ldjam.com/events/ludum-dare/46/social-distancing-for-ladybugs

this was a great game! i really enjoyed it, and i'm looking forward to playing other things that you produce.

The game is impressive but I have few comments

- The textual turorial is a lot too long and dispensable

- When you select an action, you can't change.  This is tough. It is surely a choice but the player can't prevent the orientation the forms will take. It feels unfair and freely punishing as the game is already hard.

- As ennemies are randomly appearing, the fact you cannot regain life is punishing too, because winning the game becames a combination of luck and skill. That expose the fact that even with a lot of skill, you can be dumbly trapped. Unfair stuff...

- The price of cards affecting the players movements. The game is already hard, the actions are expensives and the fact that it affects the movements turn the game even harder...

-Regaining life: by destroying ennemies, taking trinkets or by reaching the next level could rebalance the game and, if it will not be a lot easier, it could looks more fair to the player.

I don't want to be tough, I really appreciate your work, I just think that the player experience should be a little more balanced. There are surely things that I don't know about your jam, and I am sorry if a asks for too much.

But you already made agreat work ! Thank you a lot ! You are amazing !

Hey, thank you so much for the feedback, I really appreciate it!

Most of the issues you covered definitely fall into the playtesting and balancing field, which I didn't have enough time to properly do unfortunately. The randomness of the level generation and enemy spawning definitely didn't help with that either.

The punishing nature of the game derives from the overall desire for it to be a roguelike, but truth is that there hasn't been a lot of effort to make it rewarding either ^^" The blue orbs (which don't spawn correctly in the compo version) supposedly help with that by giving you permanent upgrades or refilling your health while also serving as an incentive for the human to move instead of barricade, but the overall implementation of that wasn't really great.

I really like the idea of enemies dropping health and I noted it as a way to balance things out and as an incentive to move, so thanks for the suggestion!

You're not tough, player experience is the top priority after all, but I obviously rushed to make everything (somewhat) functional first ^^" 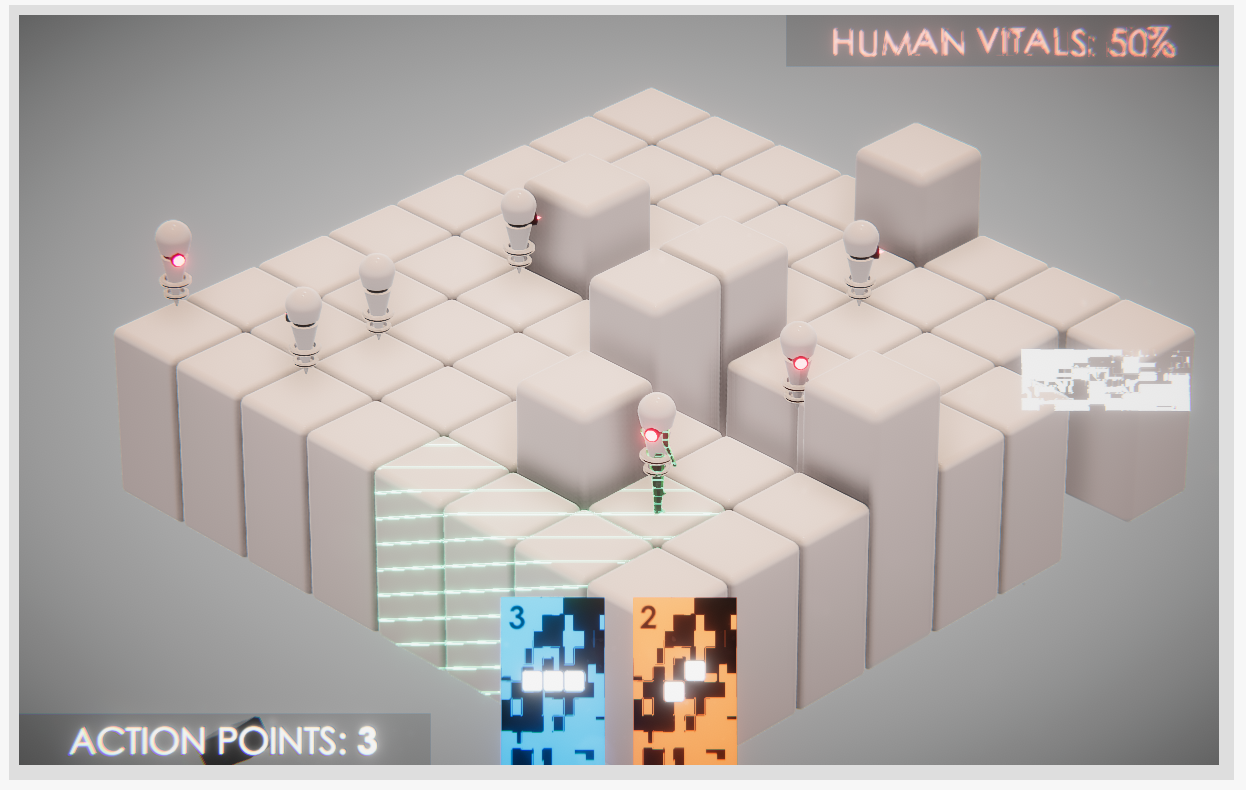 The bot spawned on top of me. Hopefully that wasn't intentional.
Stuff like this is why I want to be a game dev. It's so difficult, but just so fun too! I'm on my third run and I don't even want to imagine what the last level is like.
Reply
Harry Alisavakis2 years ago

It very much wasn't, my grid positioning code is just a bit fiddly 👀

Thanks for your comment and thank you for playing!!

Saw this on twitter and came here to say that it is a very impressive game, had a lot of fun playing it

Man this is a game jam game ?? HOW ?
Freaking impressive, I love the work on the fx, post process, global color palette and text shaders !

Alas, it looks like the game doesn't render properly on my system: while the playing of sounds and music seems to imply that the game-logic is running, the window remains black. :/

(The dev- and Unity- logos do seem to work, however.)

Oh, I'm sorry to hear that /= sounds like a WebGL issue, I'll see if I can make a Linux build of the compo submission (though I wouldn't really be able to test it)

I was able to run it on Ubuntu 18.04 using Chrome but it took a really long time to load (I don't know how much, I just left because I thought the page had crashed)

I have added a Linux build, if anyone could try it and let me know if it works, that'd be great!👍

I've downloaded the Linux build, I believe, and will hopefully give it a shot and report back later. ^_^

Works well ! One nitpick is that it would be better if the zip extracted as a folder

Update! I've tried it out, and--as tic_is_mad reports--it does indeed seem to work. ^_^

As to the game itself, I like the idea, but I have a few points of critique, if I may. Before I do, however, please note that I've only played a level or two, and so it's very possible that some or all of the below is answered in later levels.

- There seemed to be little incentive to move the human character overmuch. I just parked them in a corner and blasted away with attacks, with the occasional defence as called for.

- Perhaps relatedly, there seemed to be few objectives, save "survive all enemies"--and no clear indication of how close I was to that goal (that I spotted, at least).

- Since all the attacks were the same aside from shape and cost, and since enemies were seldom clustered enough for the attack-shapes to make much difference, the choice of which attack to use didn't feel all that interesting.

- The tutorial was somewhat front-loaded, with quite a bit fed to the player all at once. It might be easier to absorb if spaced out a bit, especially if the player can do the things taught just after each lesson.

All that said, I do think that this is a premise that could be quite interesting, and I like the AI character thus far. ^_^

A really nice and good-looking game, with very well designed levels, but how painful it is to return to level 1 if they end up with you :(

Fantastic game! I love the tactical element of this game, and the intensity! I featured it in my last video if you're interested!

the visuals are great, but I'll be honest, the writing is verbose 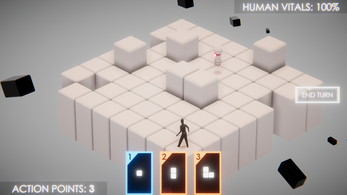 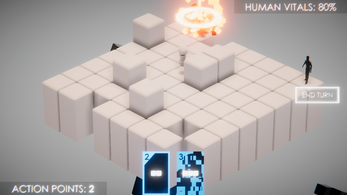 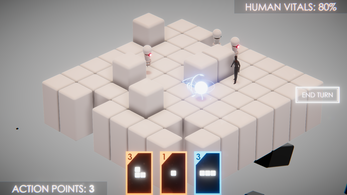 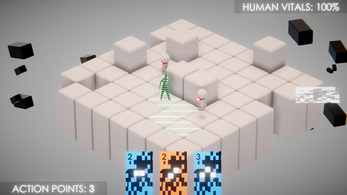